Albert Durer embodied the quest for perfection in the representation of the human body. He manifested this in both the 1504 engravings and the 1507 oil paintings of Durer Adam and Eve.

Albert Durer was the third of 18 children of a successful Nuremberg goldsmith. His father, Albert Durer the Elder, taught him the trade of engraving. Durer Jr. perfected engraving in the workshop of artist Michael Wolgemut. It was with Wolgemut where he also imbibed the rules of the art of painting.

There are some, not proven, asserts, that in 1494 Durer left for Venice. He may have there encountered the Italian Renaissance. An encounter ” that opened his eyes ” to new artistic forms, born of the religious and social convulsions of the Reform. In Venice, Durer studied the colours techniques of the great Venetians painters. In Bologna he became familiar with the theoretical works on perspective.

In his graphic prints, both Wolgemut and Dürer became references to other artists on the new technique of duplication. Dürer perfected and signed his drawings and turned them into autonomous works of art. With his copper engravings and woodcuts began the birth of graphic reproduction. As a general rule, paintings and drawings were unique specimens acquired by wealthy clients. Some were only accessible to the public in churches or town halls. The engravings, made possible to produce several hundred copies of illustrations. Here expressed the artists their ideas with freedom. And they could make it available to interested people in a much broader way.

Durer preyed on the possibilities of copper engraving techniques. He created an independent quality work of art. Differentiated from his paintings and drawings. Durer’s wife and mother sold his engravings like hotcakes at the Nuremberg fairs and markets. This built the basis for a considerable material success, which ensured Durer prosperity and prestige.

The fall of man. The Tree of Knowledg

According Old Testament, God created Adam and let him eat the fruits of all the trees of Eden, except those of the The Tree of Knowledge of Good and Evil. Then God put Adam to sleep and created Eve, from one of his ribs, to be with him. The serpent came and whispered to Eve. ”God has forbidden you to eat of that tree, for if you taste its fruits you will know what is good and bad and then you will be like God!

Eve ate of the tree and gave it to Adam also. Immediately they saw their nudity and covered their parts with leaves. God came and said to Adam, “Have you eaten of the forbidden tree? Adam replied, “Eve seduced me and I ate. Then God rebuked Eve, and she said, “The serpent seduced me and I ate.” For this reason God cursed the serpent. But guilt also fell on Adam and Eve. God sent an angel to expel  them from Eden.

In the 1504 etching, Adam and Eve look like 2 symmetrical forms, located in the Garden of Eden. Although, they hold in their hands broken branches of the Tree of Life and Wisdom. 4 animals lurk with them. They represent the 4 Temperaments of the Human Being. After the loss of innocence of Adam and Eve, God will release the animals.

In the Adam and Eve painting ( oil on table ) at the Prado Museum, an atmosphere of sensuality and sin imbues the protagonists. Eva seems to be aware of the serious fault she has committed. Her finger bends the apple branch in the direction of Adam. It’s a determined incitement to break Adam’s hesitation. Even so, Adam’s half-opened lips and subtle inclination towards Eve’s panel state that his fall is imminent. Durer painted Adam and Eve in life size.

In both the engraving and the tablet, the protagonists have navels. This way, Durer takes sides with the scholastics. They maintained that God could not create anything imperfect, such as an Adam without a navel.

Adam and Eve by Alberto Durero. Engraving of 1504

The Metropolitan Museum of Art 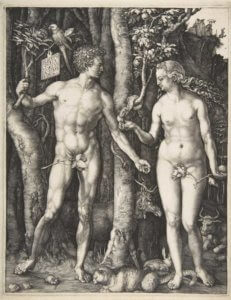 Durer appreciated this engraving because he placed his complete signature here, on the poster that supports Adam. In this work, Adam and Eve assume classic sculptural forms.   Durer drew with perfection the outline of the naked figures. A soft light wrap up their bodies.

Durer’s copper engravings explain by themselves his overwhelming success. Among the circles of humanists, artists and art lovers of several countries.  Not only will Durer etchings be a model to follow. It will be also copied with astonishing impunity in Venice, Florence and Rome.

Albert Durer confronts in his copper engraving of Adam and Eve, the classic ideal of beauty with that of the Fall of Man. The figures of Adam and Eve prove the deep knowledge that the artist had of Hellenic Sculpture. Adam resembles an Apollo and Eve a Venus. They look each other and have between them the Tree of Good and Evil, which divides the engraving in two  symmetrical parts.

Adam and Eve’s heads show their profile. At first glance, one might think they have nothing to do with each other. There is neither body contact, nor cross glances. Yet, Adam’s left hand extends towards Eve’s sex as she lowers her eyes towards his virile zone. The posture of Adam’s right foot indicates an approach to Eve. She hides an apple in her left hand, while with her right she prepares to receive a second fruit from the snake. Adam’s intention to seize Eve is evident. He surpasses with his left hand the space assigned to her, delimited by the Tree of Good and Evil. In this way, Durer also blames Adam for the Fall of Man, caused by the sexual desire that burns the first human beings.

The sculpted figures of Adam and Eve stand in front of an entangled primeval forest that occupies almos the whole background. In the Middle Age and Renaissance, the forest (in the sense that Durer represents it) was a dangerous place. Inhabited by those Barbarian tribes who attacked Rome, and threatening forces of nature. In this context, the animals of the engraving could relate  to a wild origin of the human being.

According to ancient tradition, animals in the foreground embody the four temperaments. The cat represents choleric cruelty. The rabbit, the fertile sensuality of the blood. The ox, the phlegmatic heaviness and the elk the instability of melancholics. Before the sin, the 4 temperaments maintained a harmonious balance.

But after Adam and Eve fall, the couple lost their harmonious balance. Their behavior adopted properties of animal temperaments. In this way the cat and the mouse, at the base of the engraving, symbolize the tension between opposite sexes. About the parrot that clings to the branch of the Tree of Life that Adam holds in his right hand. Some authors interpret it as an allusion to the extinction of Original Sin by the Virgin Mary.

Durer engraved a Latin inscription on the wooden panel hanging from the branch of the Tree of Life. ‘’Albert Durer created this in Nuremberg, 1504’’.  With great care, Durer stamps, for the first and last time, in an engraving his famous signature.  The model of Durer’s signature comes from Apeles.  In this way, Durer reinforces his status as a modern artist with a humanistic education. Nothing in common with the medieval concept that painters were mere artisans with a special talent.

In Adam and Eve, Durer models with the drypoint technique  a complete three-dimensional illusion of the figures, by means of a soft and uniform light that plays with its reflections in the naked bodies.

Adam and Eve by Alberto Durero. Oil on board 1507

Durer’s oil painting of Adam and Eve is as famous as the previous copper engraving. Critics report it as an innovative and representative masterpiece. Adam and Eve are the first life-size nudes painted in Germany.  Durer created it after his authentic journey to Venice. No solid surveys about the background of this masterpiece. But a lot of blabs, based on dubious assumptions

Compared to the copper plate, Dürer sacrificed the wealth of detail and symbolism for the sake of intense simplicity and sensuality. Adam and Eve stand apart on two large lime wood panels measuring 209 x 81 cm and 83 cm. Adam and Eve are the same height, although their skin tones are different. Adam’s skin rich texture, full of soft shades show bones, veins and muscles of his anatomy.  Eva’s skin reflects a brilliant light that dominates her whole body. This is how Durer shimmers the permanent dichotomy between equal and different sexes, in an intense, perfect way.

Adam’s hands, expose moderate vacillation. His right hand shows tension and conflict. The fingers of his left hand grasp the apple. Adam gravitates his body towards her. This Adam of longing lips, prophesies the imminent Fall of Man.  The image radiates dynamism, reinforced with the division of the work in two halves.  The viewer absorbs in his mind Adam’s impulse to transpose Eve’s space and submit to her desire.

The black background of both panels highlights the Fall of Man, by Eve’s induction. At the same time, Durer’s rejects the obsolete medieval spirit. Rules which impose total submission to the ecclesiastical interpretations of the Holy Scriptures.

With its panels of Adam and Eve, Durer folds to the Free Spirit brought by the Renaissance and the Reform. The interpretation of the Bible will no longer be a patrimony of the Catholic Church.

After his death, the life-size nudes of Albert Dürer were first exhibited at the Nuremberg City Hall. From there they went to Prague. During the 30-year war, they Swedes captured it  and ended up in Stockholm. In 1654 Queen Christine gave it to the fourth  monarch of the  Spanish Austrias, King Philip IV. 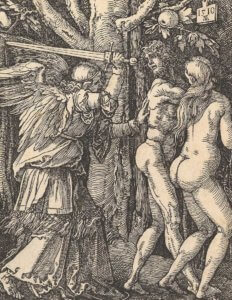