Looking out of the Window 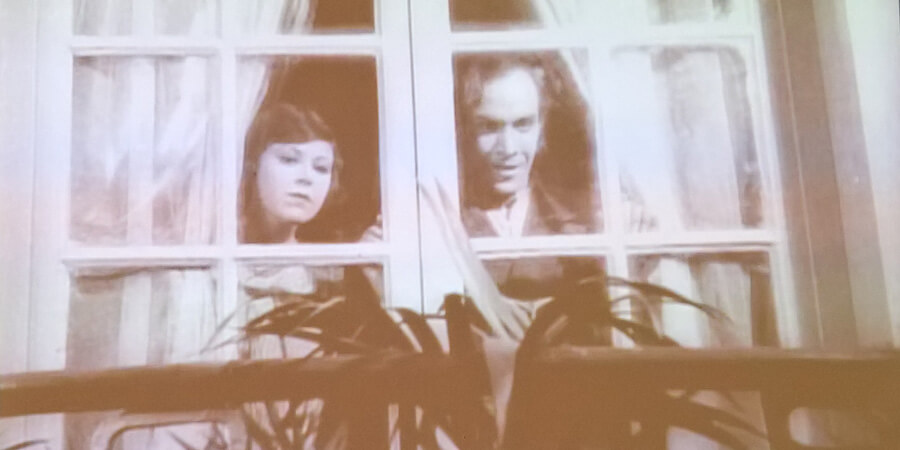 23 Apr Looking out of the Window

Posted at 17:22h in Madrid, Uncategorized by Irina Karasenko 0 Comments

Greetings from Irina Karasenko of Madrid Tourist Guides. This blog is the first of a series in which I would like to share with you some reflections that inspire me masterpieces from those museums of Madrid where we develop our private tours.  Recently, we did with a couple from Virginia, U.S.A., at the Reina Sofia Museum a private tour focused on Salvador Dali, one of the favorite surrealist artists of my new friends from Virginia. I believe that the Madrid Reina Sofia Modern Art Centre is the best on contemporary painting art in town. It exhibits a complete range of paintings, sculptures, photographs and movies referring to a given time period that supply a good idea of what was ‘cooked’ in artistic matters during the period in question.

So I invited my client friends to watch Un Perro Andaluz (An Andalusian Dog ) a Bunuel’s film, which contains lots of biographical allusions to the life of young Dalí. An Andalusian Dog is one of my favorite films. It is admirable how Bunuel masterfully links enigmatic scenes to the traumas and vicissitudes of a young Dalí which, after we get into the life of this genius, take on a fascinating meaning. And so the film came to the famous window scene where the unfortunate protagonists (both committed suicide in real life) are witness to that gruesome street scene with that young character of ambiguous presence who plays, absorbed, with a cut hand.

And from the end of the screening until the end of our private tour, we haven’t stopped to talk about scenes with persons in the window!

Pictures of persons in the window tend to instinctively attract the viewer. People looking out of the  window who dream, laugh or ‘look without seeing’.

A dreamer, for instance,  is the Figure at a Window where we see Ana María, Dalí‘s sister, standing in a desolate room, absorbed in the contemplation of a beautiful seascape. Dalí was only 21 years old and, in spite of his youth, he showed talent to create a mysterious pictorial, spatial and melancholic atmosphere, in addition to his perfect handling of the paintbrush which manifests itself in the simple fusion of the ambivalent character in the window with its surroundings by means of color, the subtle transparency in the left curtain, the external reflections on the crystal of the single window, the folds of the white cloth on the window sill and the gentle foreshortening of Ana María. In this case, the character in the window turns the back to us while looking outwards, like an Hellenic statue, in the hope that out there, a better life awaits. Such is the magic that the painting radiates that few viewers realize that the window lacks of the left wing.

A young Salvador Dalí creates one of the best portraits of a person who turns the back to the spectator. Despite not seeing her face, we can guess the melancholic mood that overwhelms the character. In Girl in the Window, Dalí exhibits a compendium of techniques that he has assimilated from previous masters of the art of painting such as Van der Weyden, Vermeer or Velázquez. 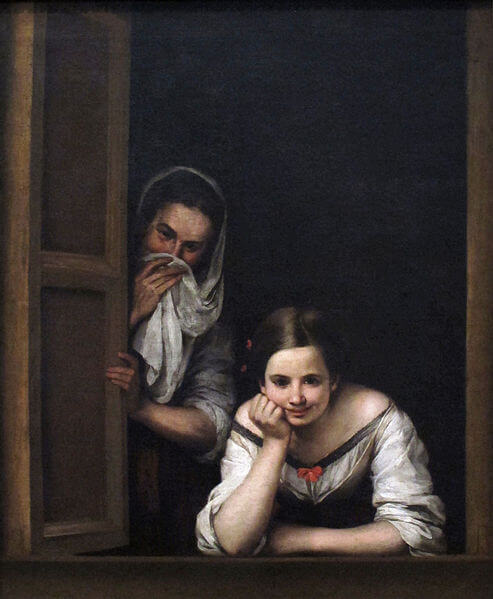 It happens often that in some moments it comes to our mind some things that don’t have much to do with what we’re doing. Something like that happened to me when I was walking with my clients and new friends from Virginia through the lonely galleries of the Reina Sofia. It wasn’t long before the loudspeakers would announce the closure of the museum. The museum corridors, with its succession of white arches, resembled those of an uninhabited monastery.

Suddenly I remembered a visit I made some years ago to the Kirchner Foundation National Gallery of Art when I stumbled across the painting Mujeres en la Ventana ( Women in the Window ) by Murillo where, in contrast to Figure in the Window,  the observer sees the face of the characters who form an unsurpassed symbiosis of technical perfection and overwhelming expressiveness.  Do they represent an impudent lady and her maid or a young harlot  with her mocking ‘madame’ or, simply, a lively young woman and her governess that contemplate, amused, a street scene?  The fact is that, in this painting, the mystery lies not so much in the true identity of the people pictured, as in the street event that inspires their laughter and mocking expression.

Bartolomé Murillo was a genius from Seville, well known for his angelic representations of the Immaculate Conception in the attitude to step on the white horns of the devil. Murillo amply demonstrated his ability to show the Jesus child and his family in an atmosphere of simple spirituality. Less well known are Murillo’s works in which he reflects shocking scenes of characters extracted from the Spanish picaresque novel, such as these Women in the Window of whom we will never know what kind of street event they were observing.

Back to Dalí, as I said, he and Luis Bunuel created a silent film considered a masterpiece of surrealist cinema : An Andalusian Dog, based on the painter’s autobiographical memories. Apart from the famous opening eye scene, one of my favorite parts is when the two protagonists (Dalí and his sister Ana María?) look out of the window. On the street there is a frightening scene going on, but the actors, Simonne Mareuil and Pierre Batcheff, are unaware of it. They only had to simulate emotions of consternation that Bunuel asked them to express, while the director’s camera was focusing them from a lonely street below. In such conditions one must applaud the interpretive talent of the actors who do not see the plot that is being filmed, but perfectly adapt their gestures to the scene and Bunuel’s requirements.

In el Perro Andaluz, Dalí features in the screenplay many dark archetypes that deeply marked his early years. His ant-phobia, which he acquired when a wounded bat he had taken from the street to his home to save its life was devoured overnight by those insects, or the character of a tremendously strict father who threatened to cut off his hand if he caught him drawing, Dalí also emphasizes on the heavy burden of the Catholic church on sexual issues and alludes to some explicit games he played with Ana María. In two scenes sex is associated with pain. During the whole movie there is a strong surrealist symbolism inspired directly by the painter’s youthful experiences. Although the initial angle/reverse angle scene, in which Buñuel pretends to cut Simonne Mareuil’s left eye, has nothing to do with all this.