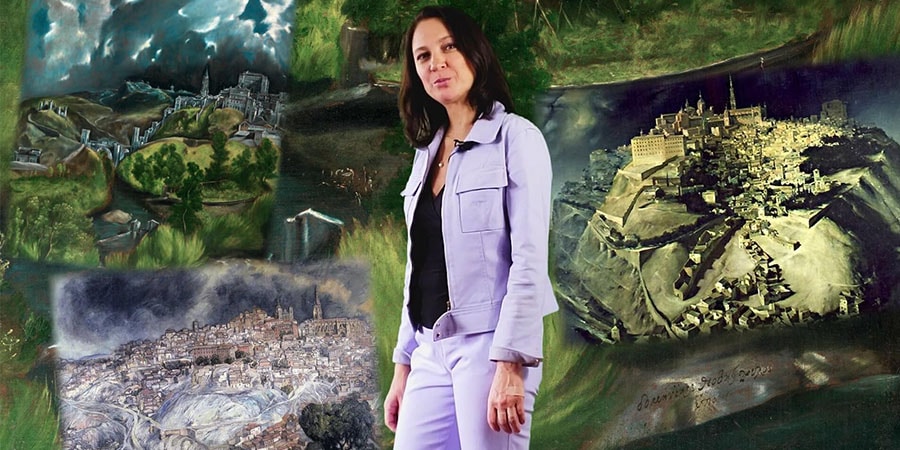 In this Madrid Tourist Guides Blog, we will discuss the View of Toledo by El Greco, Ignacio Zuloaga, and Claudio Bravo.

If you wish to enjoy live the subjugating ”Jerusalem of Europe”, you should sign up for any of Madrid Museum Tours private tours to Toledo. 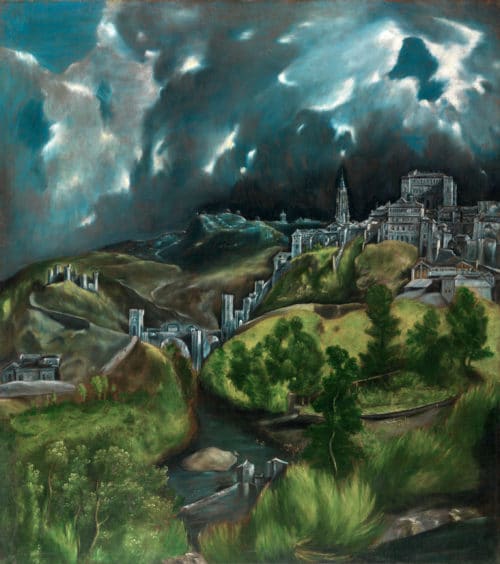 The Hospital de Tavera’s administrator, Don Pedro Salazar de Mendoza, commissioned El Greco a View of Toledo painting. It would be the art contribution to an illusory urbanistic and propagandistic project to halt the inexorable decline of the city. But first, King Philip II had to be convinced to abandon his palace at the Royal Site of El Escorial and return to Toledo. But Philip II was an old man. He suffered from gout. Four strong guards carried him in a chair through the countless staircases and rooms of the Escorial. Besides, the monarch, found Toledo very uncomfortable to live in. Furthermore, he did not sympathize with the Toledan Nobility. Nor with the Tribunal of the Holy Office, which had settled down in Toledo transforming the Plaza de Zocodover into a fearsome scenery of terror and pain.

Philip II died in 1598, while El Greco was still working on his View of Toledo. A pity, because as a lover of the art of painting, the king would not have disliked View of Toledo by El Greco.

The Genius of Crete highlighted the emblematic sites of Toledo as symbols of its power and historical value. In the eastern part of the city, he placed :

– The Alcazar, higher than the Cathedral Tower (swapping their respective positions).

– The Alcántara Bridge, built by the Romans.

– and an enlarged Tagus River with its course upside down.

Excluded from View of Toledo are the buildings surrounding the Alcazar and the Cathedral. El Greco omitted, as well, the Old Roman and Arabic Walls that Philip II disliked so much, and which also curtailed urban development.

El Greco carried out a manipulated landscape interpretation of Toledo. Which, on the other side, transmits an overflowing expressive power and dramatism.

The great Domenico applied to his first landscape his unique identity traits:

– Excessive lengthening of the characters ( constructions, in this case). Like the towers of the Cathedral, the Bridge of Alcantara, and the Castle of San Servando).

– Brownish under-paint spots merge everywhere with the bluish shadows of the sky, its whitish clouds, the Tagus, and the green surfaces.

– Smooth transitions of colors, which are close in the scale of spectra (greens and yellows blend into the grass and foliage).

– Other subtle transitions of blue and white in the clouds.

In Madrid Tourist Guides we love El Greco’s uninhibited technique to sketch so nitid the figures that appear in the river, and on its banks. Some are fishing, others are ”soaking”. A couple is wringing out a large white cloth in a sort of dryer. Farther from the shore, 7 characters seem to be carrying water (at that time, water was transported to the city in buckets or mules. In any case, our favorite ”miniatures” are those of the rider and his horse. They are galloping towards the rounded rock in the middle of the river. We like also that enigmatic shadow looming over the railing of the dam.

In short, for its abstraction of reality in the arrangement of the elements of the painting and its grandiloquent expressiveness, View of Toledo by el Greco seems to us a revolutionary interpretation of the landscape, unique and unrepeatable. Both, as a commissioned piece to extol the magnificence of Toledo, and as a masterpiece of universal painting art. 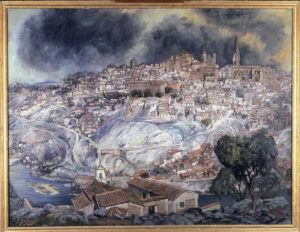 One summer month, Ignacio Zuloaga would have stood on a mountain viewpoint in front of Toledo. He would have taken out of his pocket his leather-covered notebook and begun to write in clear handwriting the immovable master lines for his next landscape. As he confessed to his friend, the collector Christian Brinton, ”I write my drawings”. Zuloaga had decided to paint a View of Toledo, just as his admired ”God of Painting, El Greco” had done more than 300 years ago.

Zuloaga, like the young Velazquez, knew that El Greco was inimitable. Yet, El Greco, Velazquez, Carreno de Miranda, Goya, Old Castile and the empty Spain, were his source of inspiration.

Zuloaga despised the new pictorial currents of his time. No Dadaism, Pointillism, Futurism, Rayonism, and other ”modernities”. Poor him. He would have wished to be in the 16th century and his only comfort was to imagine that he lived together with his ”august predecessors”.

So, after having fixed in the leather notebook his preconceived scheme and conscientiously pondered every detail that he would later capture in the drawings, colors, and forms of Toledo, Zuloaga was ready to ”attack the canvas”. First, a gray under-painting. Afterward, smear the canvas with a gypsum mixture. At the right moment, he would draw the contours with charcoal. With bold but sure strokes because the artist had already finished the painting in his mind.

No place for improvisations or modifications.

Zuloaga’s Toledo buildings have a high decorative synthesis. Even though the colors are dull yellowish browns, silvery grays, dull reds, and black. The water of the Tagus is green. Zuloaga did not like the blue color and he only used it when he had no choice. The stormy sky announces a summer storm. The dark and yellowish tones impregnate the landscape with a threatening choreography. What a contrast between the loose brushstrokes that make up the clouds and the rigorous architecture below.

Zuloaga dispenses with characters in his View of Toledo.

Only rectilinear constructions. They accredit the timelessness of Roman, Visigothic, Muslim, Jewish, and Catholic Toledo.

However, Toledo’s inhabitants built such buildings over the centuries. Zuloaga abstracts them from his landscape. But their existence is immanent to Toledo. And Old Castile, in whole, to that Spain that the artist loved so much.

He himself confessed: ”I love Spain with passionate ardor, and I am not happy nowhere else.” Ignacio Zuloaga’s love for his country was well-founded. He had traveled to many countries in America and Europe accompanying his exhibitions. Not for a single moment, his nostalgia for Spain ceased to torment him. 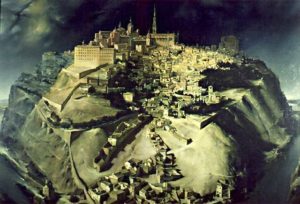 Claudio Bravo was one of the most important Chilean painters. He was born in 1936, in the beautiful port of Valparaíso from a family of large landowners. In his youth, he combined painting with ballet. The philosopher Luis Oyarzun instructed him in human sciences, philosophy, and art.

The innate skills for the painting art of the young artist led him to become the favorite portraitist of the Chilean aristocracy. With the money he earned, he embarked on a cruise to France. The trip was very bad. But it was good for Madrid. At the age of 25, Bravo settled in Conde de Aranda Street. He had a warm welcome by the Madrid aristocracy. His ability to paint awesome portraits in unusual settings was immediately appreciated.

Those who knew Claudio at that time, tell that he was an unfailing guest at the soirees of Madrid’s high

society. There, he would stand in a corner, smiling slightly, as a quiet observer of the bonfire of vanities that unfolded around him. Yet, from being an observer, he quickly became the center of observation. Claudio Bravo was young, handsome, intelligent, elegant, witty, and a pleasant conversationalist.

So, at the age of 26, this talented young man, who specialized in aristocratic portraits and still life, set out on the highest part of a mountain to paint a View of Toledo. A year earlier, Claudio had painted a somber Vision of Avila with celestial figures floating in the dark sky which, by the way, seems to us to be the best of his Avila landscape.

Claudio Bravo, a young Chilean painter faces Toledo, only a year after arriving in Madrid.

And he takes the best possible visual advantage of the solid rock on which Toledo sits. That solid rock on which the Romans built the fortress of Toletum. Because it was in the center of the conquered territory, and well protected by the big river that embraced it almost completely.

The rock, the absolute protagonist of Claudio Bravo’s View of Toledo.

An inaccessible rock, which impermeable stone prevented the filtration of water to the wells dug very deep by the Romans. The wells remained dry. Except when the rain, filled it a little.

The buildings of Toledo look very compressed. In spite, many narrow alleys of Toledo are visible. The houses at the foot of the rock boast a formal precision that rivals that of ”Google Maps” today. The varied textures of the rock reveal Bravo’s fondness for stones. It wasn’t in vain that the young Claudio Bravo possessed the talent that would make him later the main hyperrealist painter in the world.

To mention a defect, in our opinion, the height of the Flemish Tower of the Cathedral is disproportionate.

In the background, in both corners, sketchy shadows: the Alcazar and San Juan de los Reyes, perhaps?

From the viewer’s position, on the right, we glimpsed a piece of the arch of the Alcantara

View of Toledo by Claudio Bravo belongs to a private collection. We have not seen it live. Pity that we can’t find out if the shades of cold green that stain Toledo are real. Be that as it may, this painting is another example of a successful combination of yellow/green tones.

Claudio Bravo obtained a portentous chiaroscuro in his View of Toledo. Thick scary black and gray clouds loom intimidatingly over the rock. Although a protective halo of light protects the buildings in the center, menacing shadows climb the rock. Allies with the clouds to threaten the ancient city ?

But this is not a horror movie.

Toledo will survive, as always. Overcoming long phases of misfortune and depression.

It remains for posterity the View of Toledo by Claudio Bravo. Maybe a work condemned to oblivion, like its author.

It is a consolation that the same thing happened to El Greco and Zuloaga, before being reborn.

And ancient Toledo will remain nailed to its rock.

For ever and ever.